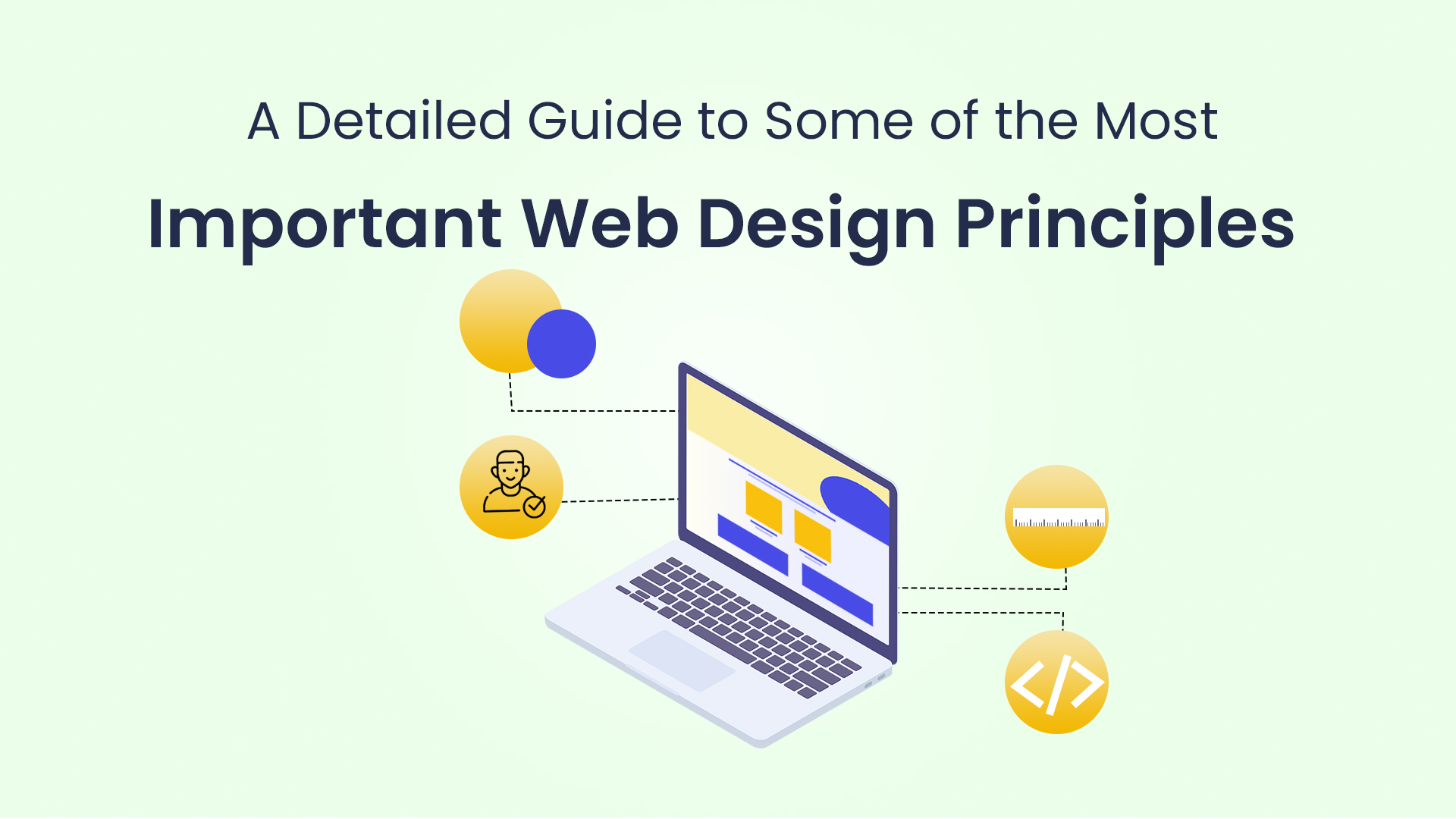 Web design being a digital medium has been through radical transformation and now that we’re in 2020, innovation is expected to drive even further. With this, web designers are always challenged to create websites that are downright clear, consistent, user-friendly, aesthetically appealing and adaptable. Let’s explore web design and development principles that are expected to rule in 2020 and beyond!

For long, shadows have been a staple in the web design industry owing to advancements in web browsers and exciting variations. The coming of grids and parallax layouts further involved the designers with shadow features as they ponder into the depth and illustrate a world beyond the typical screen. This is considered a direct response to the flat design which remained popular during yesteryears. That being said, shadows add versatility, enhances aesthetics of a web page and significantly improves user experience (UX).

The coming of ultra-HD resolution such as 4K and now 8K fuelled the need for bright, better and more vibrant colour schemes. Web development in Dubai and all over the world has prompted designers to take a bold approach and break through the norm of web-safe colours through super-saturation and combination of vibrant shades! Headers aren’t anymore horizontal but reimagined with sharp, bold angles and slits.

Websites frequently facing the issues of a video background are now open to an excellent solution, none other than ‘particle background’. The animations are soft and light-weighted JavaScript that adjusts the movement as a natural part of the background, free of glitch and hang-ups.

No doubt, an image’s worth a thousand words where a moving one’s more than that hence particle background grips user/viewer attention letting brands create a powerful impression in just mere seconds. Motion graphics such as these are now a common part of social media and catchy landing page for conversion.

Mobile internet and browsing now overrule desktop as almost everyone now uses their smart devices on the go to shop, work and perform different tasks. Mobile design has now matured significantly in terms of crisp, clear and near perfect UX with micro-interactions. A sub-menu and even further categories appear sharp and precise as the technology scales up even further.

Illustrations in a website add versatility, friendliness and an element of appeal that can be tailored per the brand’s need and tone. The trend so far has been super successful among corporations while helping brands to take a personalised approach toward diverse customers and make a lasting impression.

Typography has long remained a powerful visual element and it still is! This particular web design element has the ability to spark emotion, adds personality and adjusts website’s tone per the details being conveyed and purpose it serves. Now that the latest devices come with sharper screen resolution, the use of custom fonts also increases. For the web pages, headers are considered the primary SEO element to convey just the information readers/users are looking for.

Visionary web design and development companies in Dubai follow specific font/typography standards that help customers in identifying them immediately from the pool of competitors. During the recent years, web designers received a large selection of fonts that makes it easier for brands to express themselves to their fullest.

Large images are the rage and have all it takes to define the concept more broadly. On the contrary, focusing only on the text-filled images instead of CTA or social buttons creates a strong visual experience that further encourages users to scroll down.

Large hero images are mostly placed in the background alongside the text and overlaid content. Irrespective of the approach, large images tell the entire story from a visual perspective without just relying on the text. Always remember; “a picture is worth a thousand words”!

With images bringing such an optimistic change to a website, the power of a background video is simply immeasurable! Background videos add a lot to a website and are used to tell real-time stories, reduce the amount of other content while upping attractiveness. In addition, scientific analysis concluded that video is processed 60,000 times faster by a human brain as compared to text so why not give users a better experience in real-time.

Take the example of Apple that essentially shifted to flat design back in 2013! In simpler terms, flat design is any element that doesn’t give the perception of 3D like shadows. The design is extremely user-friendly and loads a website quickly without that annoying hang up or overly-technical elements.
Dubai web design agency and many other organisations irrespective of the size have shifted to flat design following footsteps of Apple.

Many websites feature a long menu of options to choose from. One benefit of this particular style is helping users in finding what they’re looking for without sifting through the entire website however, it takes valuable screen space. Hidden or hamburger style menu changes for it was once a common web application and is now making its way into web design. Look for the hamburger menu in Google Chrome.

Most of the B2B websites nowadays display large product images highlighting different features or product components. This isn’t coincidental as large images on top of a webpage followed by additional in-depth product images are a trend nowadays. These pictures are also responsive to fit different screen sizes such as desktop, laptop and mobile.

Making the Most Out of Gradients

Gradient has made a dramatic comeback after years of material, flat and minimal styles. Web designers all over the world are using colour fades as an element of visual interest, foster user engagement and retention while designing something that’s truly remarkable. If you aren’t not too passionate about gradients, it’s time to change your thoughts and we do have some convincing reasons here.

As said, gradient complements to the visual interest and provokes a user to navigate through a design. The eye would land on a particular coloured area whereas shifting hues, lighter and darker regions over the screen would further engage a user to browse deeper.

There’re plenty of creative ways to use gradients but the trendiest option now is in the background element with the texts, images and other features layered on top. They also provide a halo type area highlighting the primary point of navigation.

Just like in the background, gradient can be used as a front element as well. Shaded or coloured gradients are versatile strategy that contributes to overall acceptance. A foreground gradient can also be used creatively for inscription or lettering on a simpler, plain background thus giving a feel of focus on the texts. The choice of shades should be purposeful so that you get to play with contrast and readability while maintaining everything.

Overlays Can Season a Bland Image to Perfection

Coloured overlaps fuse extra interest and attraction to a bland or simpler image. A gradient overlap isn’t preferred for poorly composed or low resolution images but can breathe life to a simple scene. Gradient overlays help in establishing brands, add a voice, tone and character to the website. It’s obvious that brighter shades speak quite different from muted and dull options.

A superb gradient helps the eye to navigate through a design that has been carefully developed with users’ intent. Most of the users are accustomed to read in an “F” like pattern that starts from the top left, moves down and then shifts across the screen.

While gradients are getting all the fame, every colour combination adds uniqueness which makes them all the more memorable. A killer combination has all it takes to stand out and within the crowd, making a brand or message more impactful. Create connections through gradients in order to make a good use.

If your brand favours colours, use a gradient to pair them whereas newer brands take this approach to make a statement in the market and build a strong image. Think of how you can creatively incorporate same style gradients into multiple uses that are on the website, social media messaging, ad campaigns and print. Same colours in the same gradients would always stick to users who’re likely to associate these with your brand.

Like every other thing, product designs can either be well-done or fail absolutely. When a certain product’s well designed, users mightn’t pay much attention than to a flaw which shows prominently. Here’re a few design disasters that can literally ruin looks of even the most successful product.

Every now and then, designers think of product features being synonymous to its value. They believe that adding more features would heighten the user value altogether but the end result is a product design with unnecessary features which derails the primary purpose. This particular effect is known as feature creep; a constant addition of new product features going beyond the original scope.

The same goes for product listings against web design in Bangadesh and you can overcome this pitfall following these two tips:

If you’re thinking of why to create the prototype when the real product would be tested on the market, you’re likely to put maximum effort on high fidelity design in the market.

It’s most unfortunate that once the product has been released in the market, the team realises that some of the designs require imminent change and the cost of doing so is significant because it involves modifying the actual product, not something on the paper or a digital prototype.

This is where a prototype or model version is released for testing and it’s said that prototypes are successful in identifying nearly 90% problems which results in the final product being perfect.

Emotional Attachment to the Design

It’s natural; designers are likely to fall in love with a design they create and too much of the emotional attachment would make it difficult to remove or change it when the need be. In the end, the design decisions are too biased and the effect is known as confirmation bias where designers only search, interpret, favour and recall details that are based on pre-existing beliefs. The effect can be minimised by inviting designers into user testing sessions and nothing can be compared with the feeling when interacting with the real person or product that you’ve designed.

Anyone who creates digital products is likely to claim being a user and assuming all that’s good or bad. This is when assumptions can be devastating and lead to a product which is totally against that what end users desire. All professional and expert designers don’t let assumptions take over them but conduct proper research thereby coming on a product which is as per users likes and needs.

Excluding Users in the Design

Doesn’t matter if a team’s refining an existing product or designing a brand new, involving users in the knowledge exploration process is all too essential. This leads to poor design which is just because of excluding users and thus fails to know their needs.

Debora John is a professional digital content creator, SEO and editor having years of experience working for many different industries and recently working in the Digital Marketing department at Digital Gravity. In her free time, She loves to watch movies, read books, and play console games.

Our SEO Auditing & Reporting software offers the most comprehensive technical data. Try it free for 14 days. It's designed for a digital marketing agency and website owner to track keyword ranking and run technical auduting to improve the ranking on the SERPs. To learn more click below and it will open in a new tab.